If you were lucky enough to see Beyoncé this past December at the Air Canada Center, get ready for another super hot performance!

Right before her last tour the innovative artist released her fifth album on iTunes, with every track having its own music video.

Last month, Beyoncé and her husband, rapper Jay-Z, announced they will be joining forces for their upcoming “On the Run” tour, stopping down of course in our fair city.

The Toronto performance is set for July 9th at the Rogers center and is sure to be the concert of the year. It is being said that Solange Knowles (Beyoncé’s sister) will be the couple’s opening act, making the event a family affair.

Tickets are still available at Ticketmaster for those interested in going. This is one summer concert you don’t want to miss!

—
Sarah Khalid is a young Toronto writer covering all the latest events and hot spots to visit around the city. 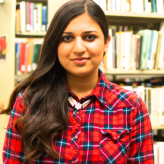 My name is Sarah Khalid and I was born and raised in Toronto, however I am now an undergraduate Communication student at the University of Ottawa, specializing in Media. I have been writing for Her City for a year and a half now, and enjoy writing and exploring a variety of topics such as: beauty, travel, and local city events.